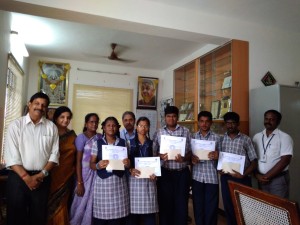 – True to this maxim, Vidya Vikasini takes effective steps to prepare the students for essential human competencies and guides them to emerge with excellence & perfection both in academics and sports. Here are some enviable records and achievements achieved by the talented young stars of VIDYA VIKASINI.

Tournaments were conducted for three groups under 14, under 17 and under 19 at Zonal level both for Boys and Girls, in the games like Kho Kho, Shuttle Badminton, Ball Badminton, Table Tennis, Chess, Hockey and Swimming. The results of these tournaments proclaim our supremacy at Zonal level.